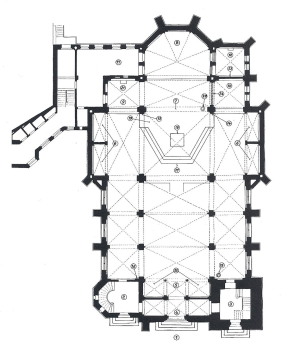 ‘ A different church ‘
The picture shows an architectural drawing of the concrete changes in the church room, introduced by the large-scale refurbishment in 1972.

The changes were the result of the Second Vatican, which, inter alia, made it possible for the altars to be moved to a more central position in the church rooms, so that the priest had a front against the parish when he stood at the altar. The benches could be made so that they formed a half-circle on the altar.

The tribulation of priests who had to read their own mass’ at the side altars had been brought to an end, so the altars became obsolete.

The three altars of the church and their choir benches, the pulpit, the confessions, the frames of the crossroads and many other decorations, all of which were removed. The high choir area was shifted up in the church, so from the benches that came to be in the transept could see the altar, which came to be at the centre of the intersection of the church space axes.

The new pulpit was put on the east floor. However, it had no sounding board, but the reliefs from the old pulpit were used to adorn its flanks.

In line with the second Vatikankoncils guidelines, the tabernacle from altar was placed in a separate place in a sacrament chapel.

The four-joint altarpiece from the former altar was hung in east. However in 2003, a historicerende reinterpretation of the old altar in a simplistic style was produced, so that visitors can make an idea of the original decoration dimensions.

In 2009, the old Maria altar was rebuilt according to the same principle as altar. Since the refurbishment, the chapel had only been marked by the Maria statue, and in front there was possibility to light Votiv candles.
With the help of different craftsmen, Michael Hadley-Madsen had have a coordinating role in the reborn of the two altars.

Two new confessions in the Sober style of the time – the so-called ‘ phone booths ‘ – were established at the back of the church under organ Pulpituret.

In 1972 the refurbishment was a shock to many people and to the delight of others.
It is quite interesting that recent years of reinterpretation of the church’s original furnishings have resonated with joy among many in the parish.

Structure of the altarpiece: 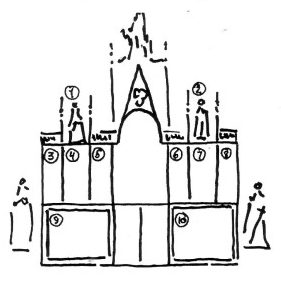 Here we have presented a handmade drawing of the ‘ new ‘ reproducing of the old altar in the church from 1905, which was taken down in conjunction with the reconstruction in 1972.

Many individual details from the altar, statues, reliefs, wood carving, crafted in stone and stair steps can we only imagined today. However, several of these parts have survived the decisive changes.
They are today in depot waiting to be used.

Who is who on the altar? All the pictures on the enclosed altarpiece tell of Eucharist (Holy Supper).

To the right is St. Paul with a sword in his hand, as a sign that he suffered martyr death by being beheaded.

We use cookies on our website to give you the most relevant experience by remembering your preferences and repeat visits. By clicking “Accept All”, you consent to the use of ALL the cookies. However, you may visit "Cookie Settings" to provide a controlled consent.
Cookie SettingsAccept All
Manage consent

This website uses cookies to improve your experience while you navigate through the website. Out of these, the cookies that are categorized as necessary are stored on your browser as they are essential for the working of basic functionalities of the website. We also use third-party cookies that help us analyze and understand how you use this website. These cookies will be stored in your browser only with your consent. You also have the option to opt-out of these cookies. But opting out of some of these cookies may affect your browsing experience.
Necessary Altid aktiveret
Necessary cookies are absolutely essential for the website to function properly. These cookies ensure basic functionalities and security features of the website, anonymously.
Functional
Functional cookies help to perform certain functionalities like sharing the content of the website on social media platforms, collect feedbacks, and other third-party features.
Performance
Performance cookies are used to understand and analyze the key performance indexes of the website which helps in delivering a better user experience for the visitors.
Analytics
Analytical cookies are used to understand how visitors interact with the website. These cookies help provide information on metrics the number of visitors, bounce rate, traffic source, etc.
Advertisement
Advertisement cookies are used to provide visitors with relevant ads and marketing campaigns. These cookies track visitors across websites and collect information to provide customized ads.
Others
Other uncategorized cookies are those that are being analyzed and have not been classified into a category as yet.
GEM & ACCEPTÈR